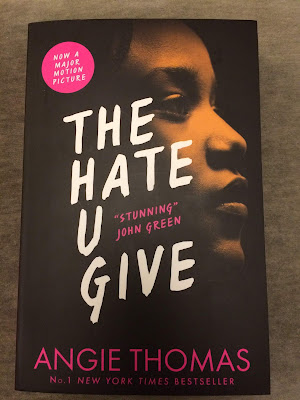 The Hate You Give by Angie Thomas.

This book is so powerful and so thought provoking and clever that it has stayed with me. I often start a new book immediately after finishing the old one but I couldn't do that with this. The story was still in my head and I needed to let it sit a while whilst I thought about it. It gave me such insight into the lives of black Americans and the suffering they have at the hands of some of the police. I thought I knew about this, but, this book really brings it home. I learnt some stuff. I thought about a lot of stuff. I think everyone could do to read it.

Starr is fourteen and lives in a poor, predominantly black neighbourhood which has a strong sense of community but also has problems with gangs and drugs. Her family own the local store. She is struggling with her sense of self at home as one thing and then at school in a richer, whiter neighbourhood she feels like she has to be a slightly different version of herself. She finds it a difficult and exhausting balance. Starr leaves a party with Khalil, a childhood friend who she has slightly lost touch with. As he is driving her home they are stopped by the police and Khalil is shot and dies. The community are outraged at the murder of a teenager and a Black Lives Matter campaign begins around his death. Starr is managing her grief, her family expectations, her friends at home and at school and the needs of her community. She is a witness to a murder and has to decide how to use her voice.

The characters are brilliantly drawn and as a reader you really care about all of them, they seem very vibrant and alive. There is a strong feeling of tension, of missed opportunities, of unfair treatment and broken promises. The subject matter is moving, interesting and very important to engage with. I can't recommend this book enough. 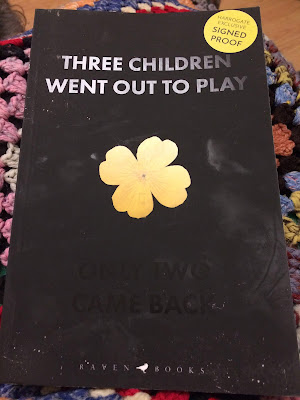 Sisters Rosie and Laurel have been known as The Flower Girls since an event that occurred when they were six and ten years old. They met a toddler, Kirstie, in a playground and a few hours later she had been attacked and killed. Laurel was convicted of her murder, Rosie was deemed to young to stand trial and could not remember the events of the day. The murder shocked the public and there was outcry leading to Laurel being kept in prison and her family given new identities.

After the disappearance if a young girl from a hotel that Hazel (Rosie) was staying in, the past becomes stirred up. Hazel's identity is likely to be revealed and she is worried about public opinion. At the same time, Laurel is applying to the parole board to be released. The events of the past are catching up with them both.

The book considers some very interesting family dynamics and several moral and ethical dilemmas. It was an ok read but I didn't find it entirely satisfying. I think that might have been because I guessed one part of the plot before it was revealed, but then, there was another one that I had no clue about. 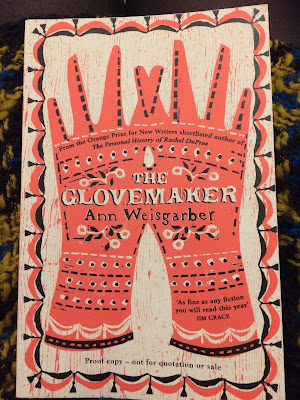 The Glovemaker by Ann Weisgarber.

I really enjoyed this book, I was completely engrossed in it. The glove maker is Deborah Tyler, a Later Day Saint living in Utah in a small settlement called Junction. It is January 1888 and Deborah is waiting for her husband, Samuel, to return from a long period working away as a wheelwright. A stranger turns up on Deborah's doorstep and she knows that he is going to bring trouble to her and the rest of the settlement. She realises he must be on the run, but he uses phrases that the Saints use as code between themselves and so agrees to help him. She knows that the Marshall and other lawmen must be close behind. The decisions that she and a neighbour Nels make in helping this man impact on their lives and those of their community.

The vast majority of the action in the book takes place over just four days which is clever, it almost feels as if they are unfolding in real time. I was gripped and was right there in the cabins or in the snow with Deborah and Nels. The scene setting is great, the sense of place is very strong, I could really see this settlement and landscape in my mind and it acts as another character. As a reader you could feel how hard their lives were in this harsh environment and see the strength of character required to live like that. It asks some interesting questions about the will of the individual and the will of a community or family.

It was a lovely read, quite moving in places, and I was a bit sad to finish it. I will be looking out for the author's previous books. 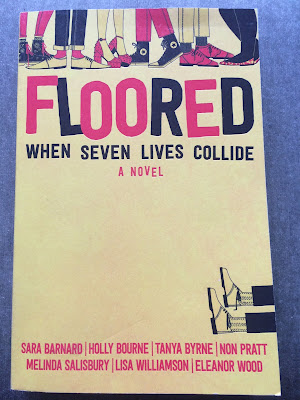 There is an interesting concept behind this book. An editor asked seven highly respected YA authors to collaborate on writing this book. I've read some interviews with the authors and it sounds like they all enjoyed the process. Interestingly they have not said who wrote which character and I haven't read enough from all the authors to be able to guess.

Dawson - a teen heartthrob actor down on his luck, Sasha - delivering a parcel, Hugo - rich and spoilt, Velvet - on work experience, Joe - escaping a school trip and Kaitlyn - on work experience and loosing her sight are in a lift at a top television broadcasting centre. One more person enters the lift, something happens and the lift becomes stuck and everyone is trapped. This event changes the course of all their lives. The reader follows what happens to each character as they meet up around the same time every year as they come to terms with the events that happened after the lift experience. Each character has issues: life changing illness, caring for a parent with dementia, unplanned pregnancy, poverty, controlling parent, questions of sexuality and friendship problems. The story follows them for several years and I found it interesting to see our their lives unfolded as they grew up.

I enjoyed reading this, it was cleverly done. In some places I wanted to know about certain characters in more depth and I suppose as there are 6 main characters it would have been a much longer book to fit all that in. There were a couple of story lines that didn't get as much attention as I felt they deserved, again, probably because they are all main characters. 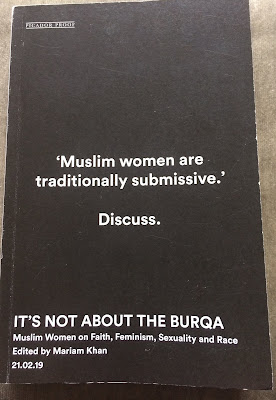 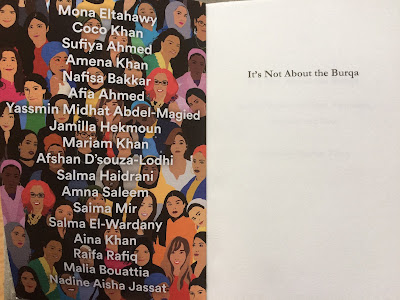 It's Not About The Burqa ed. Mariam Khan.

This is a fascinating collection of 18 essays written by a diverse group of Muslim women. The aim of the book is to give a platform for the voices of these women as they are often under represented or not represented at all in the mainstream media. The topics covered range from mental health to sex to feminism to marriage. These are stories of families, work, culture, religion, dress, love and having a voice. Every essay was interesting, gave me food for thought and I learnt plenty too. There is a short biography of each women featured in the back of the book which is a good place to start if you want to find out more about them.

I particularly enjoyed reading 'Immodesty is the Best Policy' by Coco Khan, a Guardian journalist. It combines family stories, exercise, dress and the cultural community with a heft dose of humour which doesn't detract from the serious points made. I also liked 'The First Feminist' by Sufiya Ahmed, an author and journalist. She talks about the impact that a book about Khadija bint Khuwaylid, the Prophet's first wife, made on her when she was given it at the age of twelve and how her influence has been there throughout her life. 'Eight Notifications' by Salma Haidrani, a writer and journalist looks at how she has been trolled on social media for writing about Muslim women. She considers how this has changed her behaviour in terms of safety whilst keeping her voice. It is a sobering tale of people trying to silence women.

I highly recommend this book. 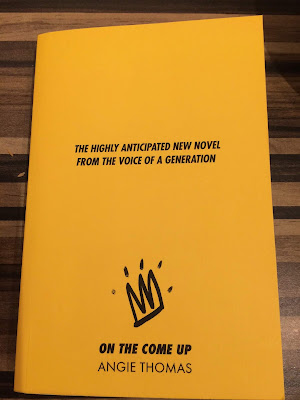 On The Come Up by Angie Thomas.

Having enjoyed Angie Thomas' first book immensely I was very excited to read her new one and I was not disappointed. This is another powerful and moving story which both entertains and makes the reader think. It is set in the same area as The Hate You Give so there is a familiarity for the reader but this is a stand alone story.

Bri is 16 and is determined to become a famous rapper, like her dad. She is talented but has struggles that are holding her back, a shocking incident at school, living in poverty, being ignored because she is female. Bri is angry at the injustice that she sees. Her mum and brother are working hard but not getting far and her aunt is a gang member. Bri writes a song which becomes a hit but there are lines in it that people misinterpret and she is portrayed as someone she isn't. She has to balance the image which will help her in her career with her real self. Will her friends stand by her? Will she get her break?

Bri is a really strong character and as a reader you care about what happens to her. It is a fast paced story and a great read.