What I read in April 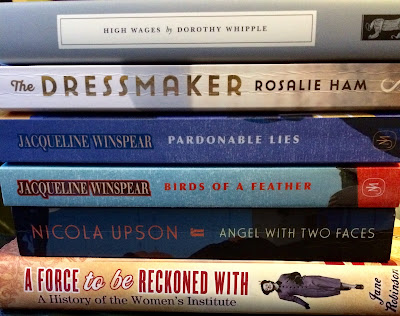 I have not really spoken much about my reading habits here except for in this bookworm post where I also answered a reading questionnaire. It has been seeming daft to me to not have been talking about books here as I love reading and if I'm relaxing I'm either reading or knitting. But not both, I haven't mastered that yet....

I think part of it has been thinking that I should write some 'proper' book reviews and every time I started that I just couldn't get going with it. So instead, I'm hoping to do a monthly round up about what I have read in that month and I'm just going to chat on like I would at my book group or at a cafe or at knitting group or at the pub.

I really wish that I had managed to decide this in January as it would have been pleasing to me to start this series at the start of the year but I've had a little chat with myself and May is perfectly acceptable instead! 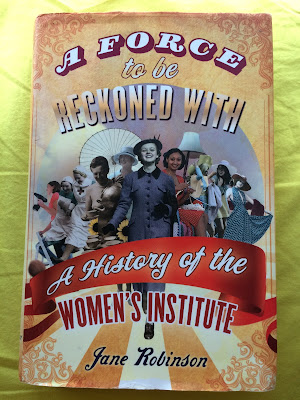 I began this book in March and it was finished in April. I borrowed this from my book group, we swap books and chat about them rather than all reading the same one each month. I enjoy social history books and I am a WI member so I was eager to read this and find out more. Each chapter covers a certain period in the WI's existence and I was particularly interested in the ones covering the World Wars and the 1930's. It was great to read about what a bunch of very determined women can do. What I enjoyed most was realising just what a force for change and what a powerful campaigning organisation the WI has been since it's inception. I knew some of this but it was fascinating to know more. If you have an interest in social history, WI member or not, you will enjoy this. 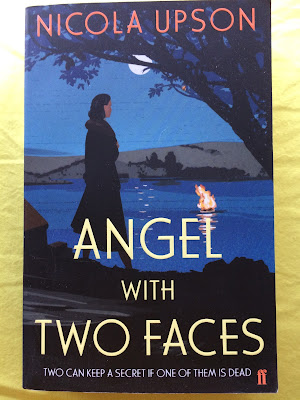 I am currently addicted to modern crime/detective stories set in the 1930's due to my recent discovery of this author and the one that I will mention next. This is the second book in Nicola Upson's Josephine Tey series but is the third one I have read. In a very uncharacteristic (and frankly rather stressful once I realised) move I read the most recent one first. Part way through I realised it was part of a series but by then I couldn't stop and start at the beginning. So the first thing to say is that if you can cope with reading a series out of order then you can with these as each holds its own as a separate book although it is clear that the characters have a back story.

The character Josephine Tey is a writer who has written a successful crime novel and several well respected plays. In this book she goes to Cornwall to stay on the estate of a friend and write her second crime book. The friend, Inspector Archie Penrose, ends up investigating the goings on at the estate and Josephine gets drawn in. It is a super book, strong characters, interesting storyline, good period detail. I really couldn't put it down and I recommend it highly. 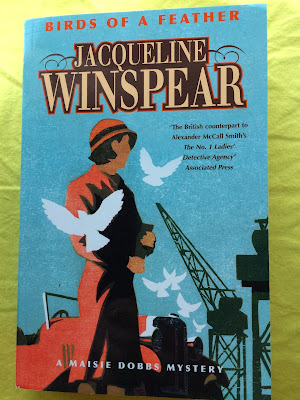 The Maisie Dobbs mystery books are my other current 1930's crime obsession. I am enjoying them so much, I'm torn between reading them one after another but then running out or rationing them so I have some to look forward to for a long time. This is book two of the series and I read book three straight afterwards as I couldn't wait! Also, loving the cover art. I don't choose books by their front covers but these definitely attract me and are reflective of the nature of the book.

Maisie Dobbs is a private investigator with an interesting background as the daughter of a London tradesman who went on to university and then became a nurse in France in World War One. The scars of the war are still to be felt both in Maisie and the other characters and there is a great sense of period and place in these books. In this novel Maisie is tasked with finding the runaway daughter of one of the country's wealthiest men and in doing so finds links to recent murder cases and to the war. It is both well written and gripping and I enjoyed it enormously. 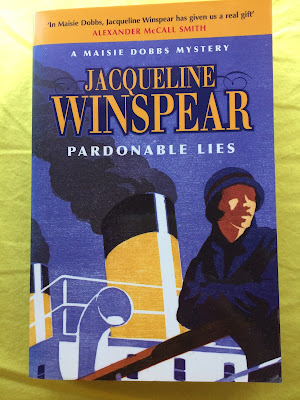 This is Maisie Dobbs number three. It is set in London in 1930 and Maisie is asked to prove that an aviator shot down in France in 1917 is really dead, as was reported at the time. This means that Maisie has to return to France to lay some personal and professional ghosts to rest. This novel explores the sadness of that time wonderfully and doesn't flinch from looking at the aftermath of so much death and destruction. It was a really super read and Maisie is a fabulously drawn character. 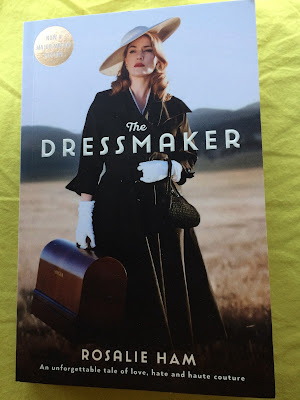 Hmm. I still don't know whether I enjoyed reading this book or not. It is set in a small rural town in Australia and Tilly, who left under a cloud aged 10, has returned to look after her unstable mother. She returns as a couture dressmaker and makes clothes for the locals who are still both suspicious and hostile and relations are tricky to say the least. I found it very difficult to like any of the characters, including the main one so I found it harder to care about the story. But, the descriptions of the clothes that Tilly makes are just fabulous and you can really envision these designs and outfits coming to life from her machine. So if you like clothes a lot it is worth a read. I haven't seen the film yet, I wanted to read the book first so I'm going to watch that next and see what I think. 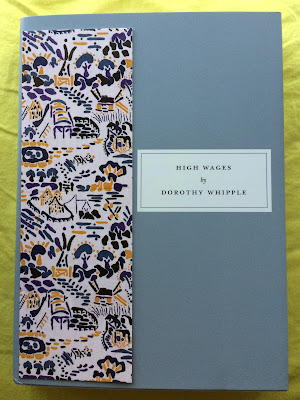 This is one of the books in the Persephone Books series. They publish neglected works of fiction and non fiction by mostly female writers of the mid twentieth century. The authors range from well known like Noel Streatfeild, E.M. Delafield and Winnifred Holtby to the less well known. There are 122 books in the series, covering a breadth of topics, this is the eighth that I have read and I have enjoyed them all. The books are beautifully bound with endpapers that are copies of fabric designs. Each book comes with a bookmark in it's endpaper design which is a wonderful touch. This design is Farm Scene, a 1930's dress fabric.

Dorothy Whipple (1893-1966) wrote eight books, two of which were made into films. This is the first of hers that I have read and I enjoyed it greatly so would look out for another by her. High Wages was  first published in 1930 and is set in 1912. The main character is Jane, a young woman with no family behind her who starts a new job in a better class of haberdashery as a shop girl. The story follows Jane's progress in the shop and in the world within the constraints and class structure of the time. Jane is both intelligent and motivated with an eye for fashion and plenty of ideas and it was interesting to see what became of her.

As well as the story the novel is a commentary on both the lives of shop girls and the shopping habits of the times. I learnt a lot from a social history point of view. There are also lovely descriptions of fabric and clothes and accessories which bought the shop and the customers to life. It is a lovely read.

What have you been reading recently? Anything I should add to my reading list?
at 15:04 13 comments:

I recently bought a few 1930's copies of The Needlewoman magazine. I really like finding this magazine as it covers a wide range of needlework projects but usually contains at least one knitting pattern. It also has some lovely illustrations for fashion and styling inspiration. 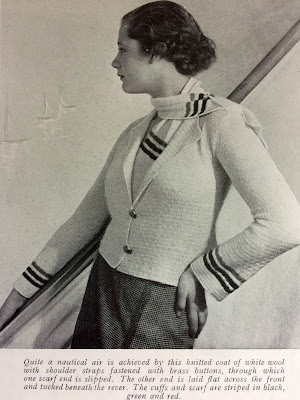 This 'jaunty little cruising coat' is from the July 1933 edition. I think it is a lovely little jacket, perfect for in-between weather or a walk along the sea front. I particularly like how the scarf is integrated as part of the jacket, I haven't seen that in any other knitting patterns that I have from this period. I thought I would share the pattern here so enjoy it if you make it. 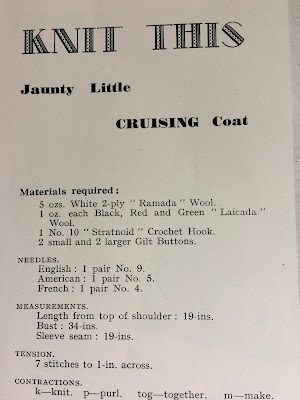 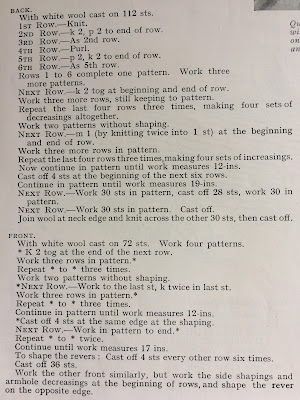 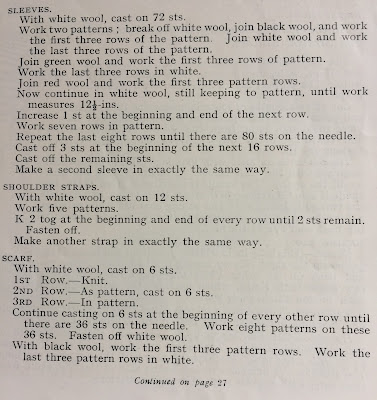 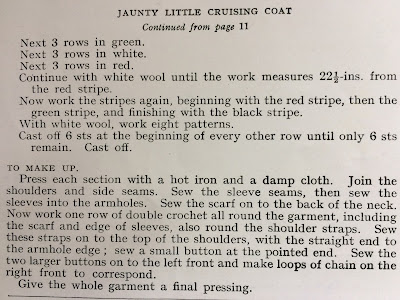