A few weeks ago I went on a birthday trip to London with my lovely friend. We have had a few visits to London and had such fun on each one and this was no exception. We go for two nights and three full days and pack in as much as possible in that time. We come away knackered with fabulous memories and it is just the best. I was born and raised in London and I still miss many things about it so it is great for me to get a visit home!

As soon as we deposited our bags we went to the Vivien of Holloway shop as we had promised ourselves a good look and trying on session. I wanted to get a feel for the sizing so that should I wish to order online in the future I would know what worked for me. The shop assistant was so amazingly helpful. I thought I might get myself a birthday dress but I ended up with a fabulous pair of shorts instead! 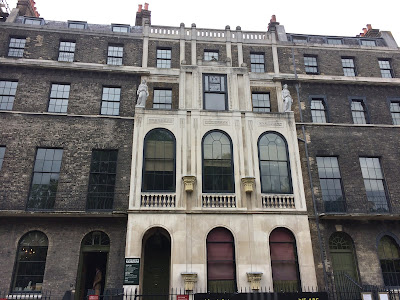 We then went to the Sir John Soane Museum, shown above. Sir John Soane was a 19th century architect; he built the Bank of England and Dulwich Picture Gallery. Over time he acquired these three houses and converted them to be his home, his library and his museum. He collected architectural models, plaster casts, statues and art amongst other things. He left it all to the nation on his death, stipulating that people must be able to visit for free and that it was to remain as he had left it.

It is a fascinating place if ever so slightly bonkers. The corridors are very narrow and the basement houses all the casts and statues and is rather erie. Hogarth's series of paintings - The Rake's Progress is here and we got a good look at it with a wonderful guide who told the story of the paintings in a very amusing fashion.

The museum is near Lincoln's Inn which is both a society of lawyers and the area where many lawyers and barristers are based. We had a good wonder around looking at the great Georgian architecture and all the interesting buildings. 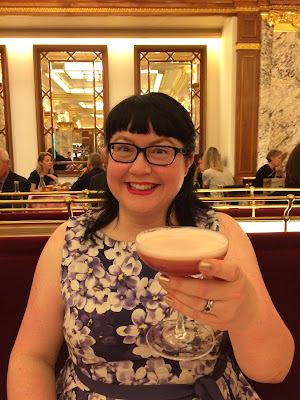 After a power nap back at the hotel we got spruced up and went out to Brasserie Zedel for a lovely tea in it's fantastic Art Deco restaurant. We enjoyed both the food and the location very much. Before and after the meal we went to the bar, Bar Americain and enjoyed a couple of cocktails and the lovely atmosphere. It was a great night out. 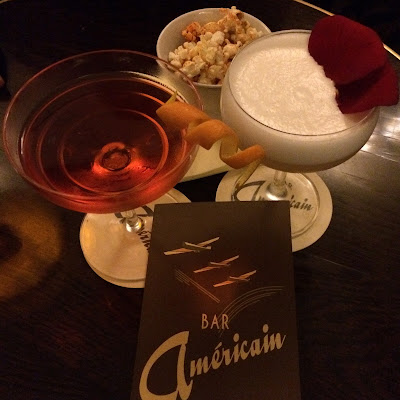 The next day we headed over to Kensington. We walked past this amazing 1930's building which used to house Barkers department store. 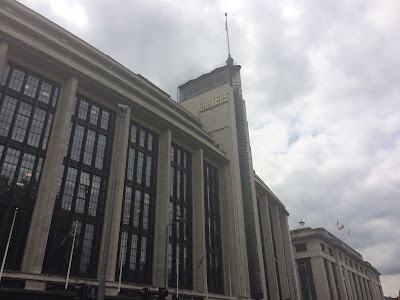 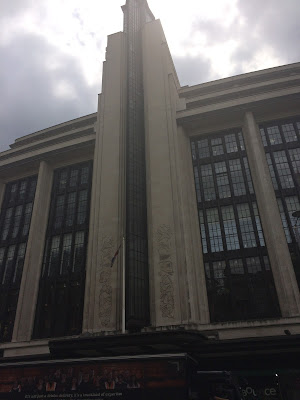 We were heading for Kensington Palace for a look around and an exhibition. 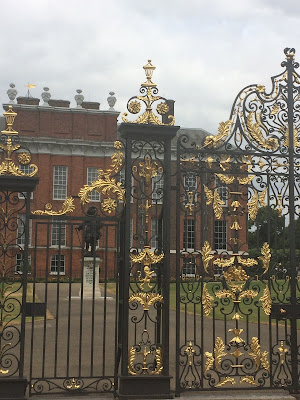 You can explore several periods of history at the palace: the reign of William and Mary from 1689, the early life of Victoria (born 1819) and three 18th century German princesses Caroline, Augusta and Charlotte. We had a good wander around everything.

We went to Kensington to see their current exhibition - Diana: Her Fashion story.

The exhibition was looking at the evolution of Diana's style, from the early eighties pie crust blouses to the glamorous evening gowns with powerful suits in between. It also looked at her relationship with various designers. It was interesting and there were some lovely and iconic outfits but there really were not that many. I think if we had not looked around the palace too we would have felt like we had spent a lot of money to get in for not very much.

These two dresses were my favourites, probably because of the spectacular beading and embroidery. Excuse the reflections on the photos, everything was behind glass. 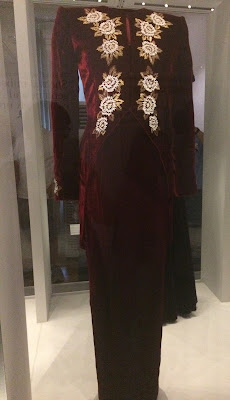 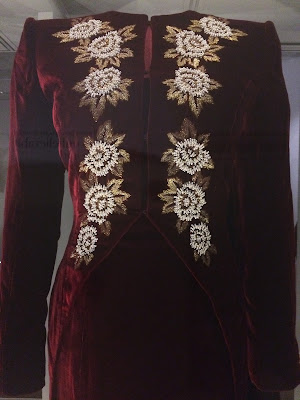 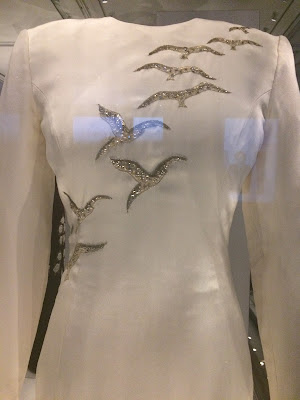 The birds continued down the back of the gown.

After a walk through the grounds we went on to the Victoria and Albert Museum to an exhibition which will be the subject of my next post!

That evening we went out to the theatre. 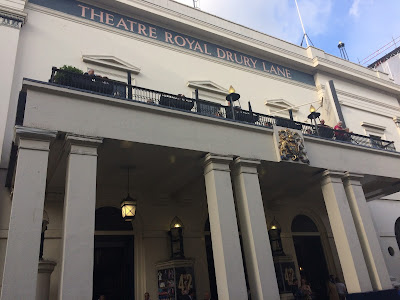 We got marvellous seats, at half price, for 42nd Street. You can watch a trailer here and it is well worth it. I really can't recommend this show highly enough. It is a perfect musical spectacular packed full of big tap dance numbers. The scenery and costumes are marvellous and we just had the best time watching it. It was brilliant.

After all that excitement we had a slightly quieter next day. We went to the National Portrait Gallery to see the BP Portrait Award which was fantastic. Then we fancied a good walk so we went through Trafalgar Square and down Whitehall so that we could take in all the sights. 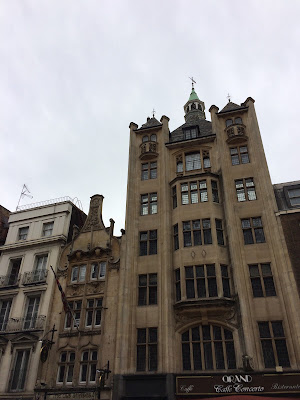 We walked over Westminster Bridge and along the South Bank. Some of this was the route of the Moonwalk so we relieved some memories and were grateful to be wearing more than a decorated bra!

It was lovely walking along by the Thames past the London Eye, the Royal Festival Hall and Tate Modern. We went over Millennium Bridge to St Pauls and then, sadly, it was time to catch the train home. We may have had a little sleep on the train!

Such a birthday treat!

What I read in May 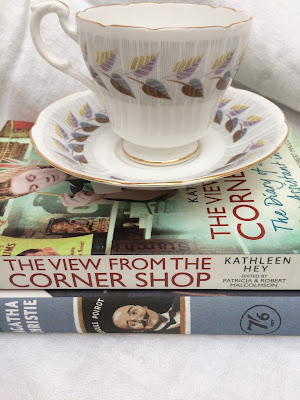 Gosh, how am I behind on this series already?! I can't believe it is July! If you didn't catch the first post about my reading habits you can find the post for April here. 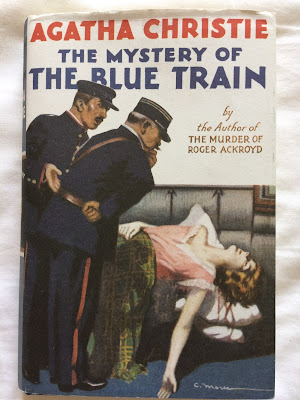 I have only read 3 or 4 Agatha Christie novels and decided I really needed to read some more seeing as she is one of the most famous and prolific crime writers. When this lovely copy turned up at my book group I knew I would read it. The story is interesting, all the action is based around a famous precious ruby called the Heart of Fire and it's new owner. Most of the story occurs on the Blue Train which is travelling from London to Nice and many of the passengers become involved in the drama. This is a Poirot story so we get to see him unravelling all the mysteries. I enjoyed the story and there were some interesting characters.

However, when reading old books there can be some uncomfortable/upsetting moments when your values/beliefs clash with those in the book and you come across what Mim at Crinoline Robot calls 'Attitudes of their Time' and she discusses this very well, probably better than I can. In this case this book published in 1928 displays some antisemitism with regards to some minor characters. 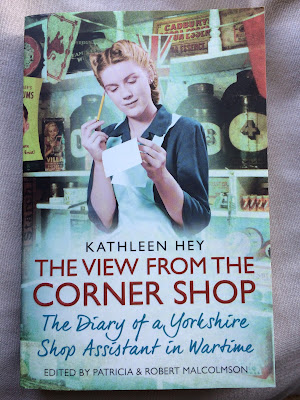 Next I switched to non fiction and picked this social history book. It is a collection of entries from a Mass Observation diary that a Yorkshire woman kept during World War Two. Her sister and brother in law were shop keepers in Dewsbury (which is relatively local to me) and Kathleen worked in the grocery shop with them. I have read quite a few Mass Observation diaries and always enjoy learning about ordinary people on the Home Front and their wartime experience. This one was interesting as I have read a lot about rationing and shopping from the shopper's point of view but nothing about it from the other side. Kathleen writes about the difficulties of keeping up with the changing rationing system, the trials of getting their share of supplies, the filling in of endless forms and the worries of letting down their regular customers. You find out how oranges can cause major disruption and how unpopular tea rationing was. Unlike some diaries there is very little of a personal nature so you don't get to know Kathleen very well but you do find out lots about shop and town life during the war. 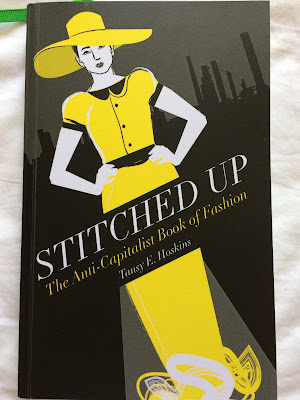 One reason that I didn't read many books in May is right here. I have been trying to read this book, all about the fashion industry and in theory it is right up my street and I should be enjoying it. However, I am only on chapter 4 and that has been a struggle. It is interesting but I think the anti capitalist viewpoint is rammed home so strongly and constantly that I just found it a bit wearing. So I have decided it might be one to dip in and out of, reading a chapter here and there, rather than reading it straight through. I don't want to give up on it yet as what I have read has been of interest.

The final book I read in May was 'The Lost Art of Keeping Secrets" by Eva Rice. I was so efficient at passing it on to the charity shop when I had finished it that I didn't even take a photo of the front cover. In a way that is good though as the cover is one of those off putting pink sickly chick lit things which might make you stay away from a really enjoyable book.

It is set in the 1950's and reflects the recovery from wartime that is occurring and also the split between those who had a life before the war and those who were born during it so they are now just starting to have some fun. It follows the unlikely friendship of two quite different young women, Penelope and Charlotte and the lives that they are trying to build for themselves. There are financial worries about an ancestral pile, rock n roll, debutante type parties, memoirs, love affairs and guinea pigs. It was very readable and I really enjoyed it. It would be a great holiday book.