I have been thinking about couture frocks for a while, probably because of the latest round of Fashion Weeks and because of the Hartnell and Amies exhibition that I went to. I am always amazed at the detail, the fabulous embellishments, the embroidery, the beautiful fabrics and the sheer hard work that must go into every dress.

Whilst flicking through some 1950s Woman's Illustrated magazines I was taken by surprise to see that they featured a mail order couture pattern in each issue, by a variety of primarily French designers. I thought it would be interesting to take a look at some of them.

﻿
Woman's Illustrated was published by Amalgamated Press and then Fleetway from the late 1940s until the late 1950s. Women's magazines increased in circulation in the 1950s due to the end of paper rationing, an increase in wealth and an increase in advertising. As women were often in control of the family budget, advertisers realised that women's magazines would be a great way to show off their products. Women's magazines became far more important than ever before. In fact, in the 1920s and 1930s they were considered to be insignificant. 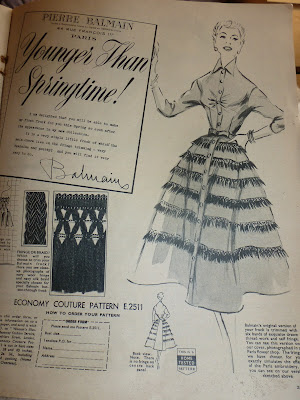 'I am delighted that you will be able to make my first frock for you this Spring so soon after its appearance in my new collection. It is a very simple little frock of which the main charm lies in the fringe trimming - very feminine and pretty! And you will find it very easy to do.'

The photo of the front cover shows the original Balmain dress. The fringing is described as exquisite drawn thread work and self fringe. 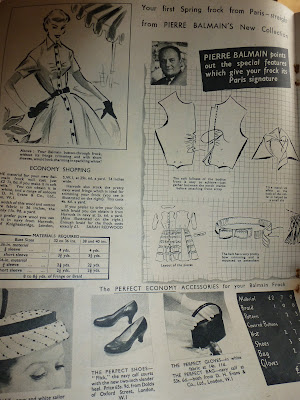 The top picture features the dress without the fringing. The fabrics suggested are Viyella for the most economic choice or pure wool. The illustrated fringing is stocked in Harrods as is the braid. In Viyella and using braid the dress would have cost £3 7s 0d. 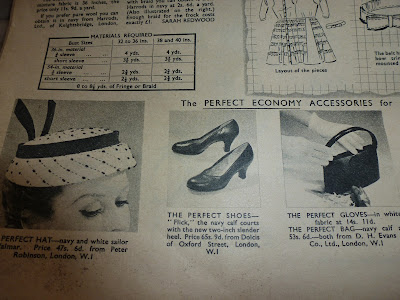 I like the fact that accessories are suggested to make it a complete and perfect outfit. The hat is a navy and white sailor hat by Walmar. The shoes are navy and white courts featuring the 'new' two-inch slender heel from Dolcis. White gloves and a navy calfskin bag from D.H.Evans and Co complete the look. If you were to have bought everything for this outfit it would have cost £12 12s 2d.

This issue features a pattern for a suit and blouse in 32-40 ins designed by Norman Hartnell. Much is made in the accompanying text of him being the royal dressmaker. The jacket is boxy with slit pockets, bracelet length set in sleeves with a slit cuff and is lined in material that matches the blouse. The skirt is straight and slim with a long inverted pleat at the front. The blouse is button through with a soft wide neck-tie and has a camisole inside. 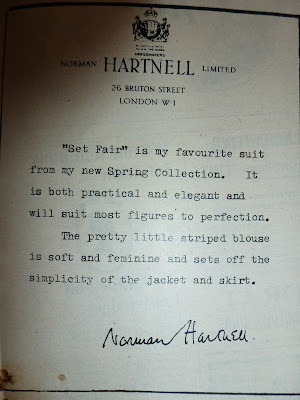 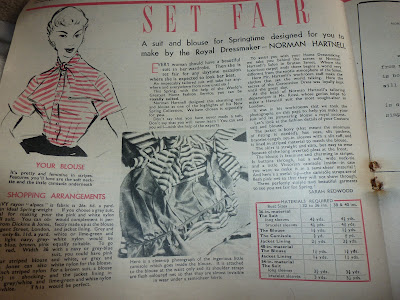 The suggested material for the suit is rayon 'alpaca' in grey, navy, grey-blue, pale blue, brown, pink or plum red from Dickens and Jones. They can also supply stripped semi-sheer nylon in shocking pink/white, grey/white and lime green/white. For a brown suit the lime green and white blouse is suggested, I think I would have loved this. 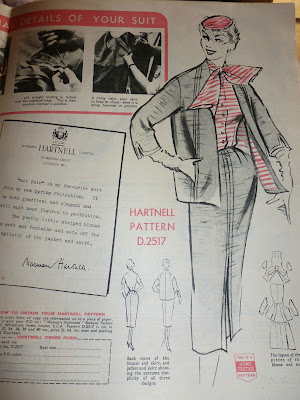 At the top of the page are some tips from Hartnell's tailor Mr Rossi to help the home sewer get the details right. These were taken in the workroom behind Hartnell's salon in Bruton street, London.

The pattern in this issue is for a skirt and blouse  32-40 ins designed by Balmain. The idea behind this feature is that Balmain has provided the pattern for a basic trend which has scope to be altered by changing the fabric and styling.

As it says in the text :

"The final choice is yours - we know it will be a good one... You'll look lovely, because you'll look your charming self." ﻿ 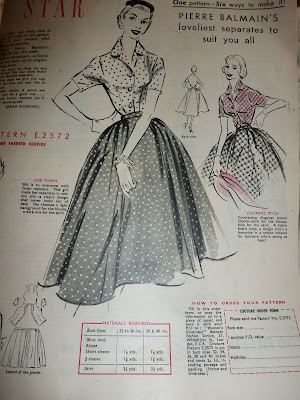 The spotted version on the left is made in coin dot silk and is called 'For Town' as "silk is an aristocrat with Town manners". The version made in diagonal cotton checks on the right is called 'Country Style'. This is made in pink for the blouse and blue for the skirt, "a colour scheme for someone who's young at heart". 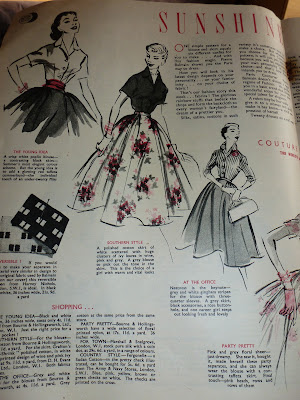 'The Young Idea' a crisp white poplin blouse with a contrasting black skirt and a red taffeta cummerbund, "the individual touch of an under twenty Miss".

'Southern Style' a polished cotton skirt with clusters of ivy leaves in wine, pink and grey with a grey blouse. "This is the choice of a girl with warm and vital looks".

'At the Office' a blouse in grey and white gingham stripes, a grey skirt and black accessories with a rose buttonhole. "one career girl steps out looking fresh and lovely". 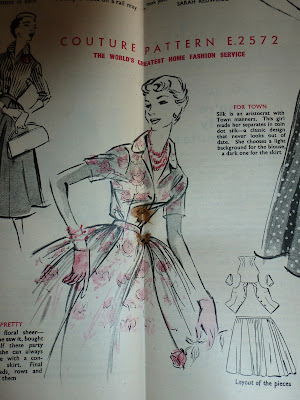 This issue features a dress and a suit 32-40ins designed by Norman Hartnell. These were featured to celebrate the Queen's visit to Paris which she was making the week after this issue came out. There she would be wearing clothes designed by Hartnell. The suit has a fitted jacket and a full skirt with pleats. The suggested fabrics are silk or fine cotton. The dress has a simple, unfussy bodice and a full skirt made in silk. 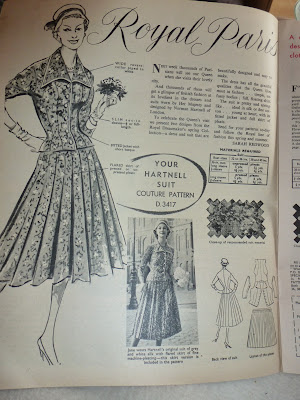 The suit was originally made in grey and white. The recommended silk from Dickens & Jones has sprays of flowers printed on grey, turquoise, brown or cream. The features highlighted on the suit are as follows:
- wide revers, collar piped in white.
- slim set-in sleeves - 3/4 or full length.
- fitted jacket with short basque.
- flared skirt of pressed or unpressed pleats. 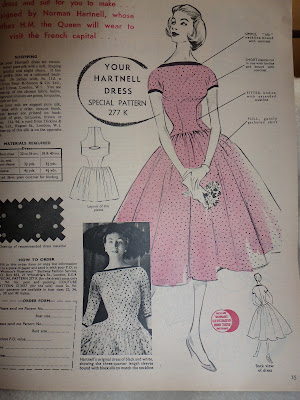 The dress was originally made in black and white. The recommended white polka dot silk from Peter Robinson & Co Ltd comes in green, turquoise, peacock or tan. The features highlighted on the dress are:
- simple slit neckline bound with contrast.
- short sleeves cut in one with bodice and bound with contrast.
- fitted bodice with extended waistline.
- full, gently gathered skirt.

The grey suit and peacock dress for me please! 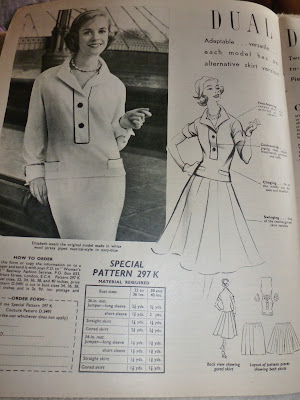 Here is another pattern by Balmain for  a two-piece 32-40 ins.

"Choose a two-piece for mid summer days! It's so easy to adapt for town or country. It's so comfortable to wear for travel or holidays.... The casual two-piece, already a favourite with the young crowd, can be worn just as successfully by any age, and when it is designed by Pierre Balmain - a young-in-heart fashion achieves a Paris finish!"

The pattern above has a semi-fitted middy top and the skirt can be gored or straight. The one in the picture is made in white wool jersey piped in navy. Plain linen or jersey stocked by John Lewis is also recommended, with contrast piping. The main features are:
- face framing revers that are mitred at the corners.
- contrasting piping that edges front band, pockets and cuffs.
- clinging fit of the middy top for ease and comfort.
- swinging line of the twelve gored skirt version. 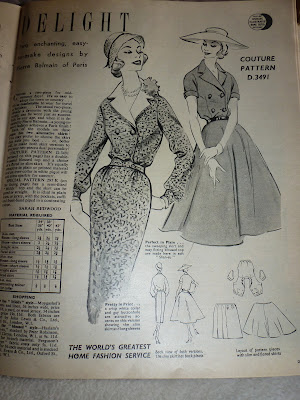 This version has a double breasted bloused top and a choice of a flared or slim skirt. Plain or printed material is suggested along with an over collar in white pique for "extra sparkle in summer". I like this version with the flared skirt the best but probably in a print rather than plain.

I wish it was still possible to have patterns like these in a weekly magazine. If you are looking for similar patterns Vogue and Butterick have released a number of their vintage patterns re-sized for today's figures.
at 15:11 3 comments:

I have been quite excited about the cold and snow in the last week. In fact, I was hoping that the cold would stay around for just a little bit longer. Not because I am a hater of the Spring, no, far from it. It is all down to the fact that I have finally knitted myself a pair of lovely, squishy, warm and cosy mittens and I love them!

I have wanted a pair of mittens for a good while but always seemed to be needing to knit something else more. So when I finished my last project (which will be featured here when I have finally sewn it up!), I quickly cast on my mittens before I decided something else was more pressing. 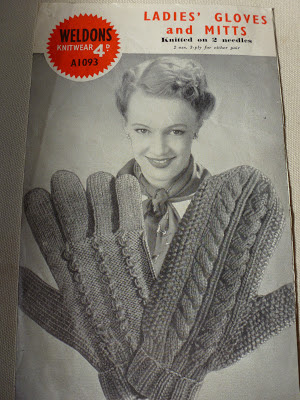 I used this pattern, Weldon's A1093 that I already had in my collection. I think it is probably from the early 1950s. I chose this for a few reasons: some lovely cables going on, moss stitch for squishiness and knitted on 2 needles which I thought would be an interesting construction as most gloves and mittens are now knitted on 4 needles.

I made a couple of changes, the first being the type of yarn. It is written for 3-ply yarn and I used a 4-ply extra fine merino in a beautiful petrol/teal colour. I didn't change the needle size as I have relatively large hands and thought that if they came up a little large that wouldn't matter. I didn't do a tension square (naughty), as, well, I was hoping for the best and frankly just wanted to get on with knitting them! But I would recommend it and indeed would do normally when not using the yarn that the pattern specifies.
﻿﻿﻿

﻿﻿﻿The wrist rib is purl 2, knit 2 and gives a nice snug fit so no draughts get in! Then you knit on in the cable and moss stitch pattern for a while before dividing for the thumb. This involves slipping 2 sections of stitches on to 2 separate stitch holders and continuing knitting on a small section of stitches. I knitted the number of rows the pattern stated and then measured it against my thumb and realised it would be far too big. I would look like some odd long thumbed creature. So I took it back a bit, no measuring, just judged it by eye against my thumb.

When the thumb is the correct length a couple of shaping rows are knitted to round it off. The next job is to join up the thumb seam. This is quite exciting as it starts to really look like a mitten and you can put your thumb in the thumb hole and admire how mighty fine it is going to look.﻿
In order to close the gap around the thumb hole a few stitches need to be picked up and knitted before continuing in the pattern. This leaves the thumb waving around comically as you knit on. It provoked some mirth at knitting group with comments that can not be mentioned here!﻿
Then it is just a matter of continuing in the pattern, decreasing to shape the top and then sewing it up which is pretty quick and simple.

﻿
So here they are! My lovely, lovely mittens! They were really pleasing to make and the construction and the cables kept it interesting. So, just a little longer of cold weather is fine by me!
at 13:18 4 comments: